In recent weeks adverts have been placed in the Belfast Telegraph for meetings being organised by a group called ‘End Time Fellowship’ and as you will see from the under noted copy of their advert they are promoting the teachings of William Marrion Branham. Just recently I also received an inquiry from a brother in Christ who had been made aware that a fellowship in Spain was likewise promoting the teachings of Mr Branham. Below the advert I will set out some of the main false teachings of the late Mr Branham who most certainly can be classed as a heretic. 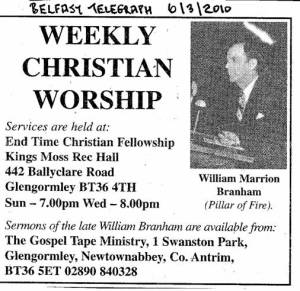 1. Back in the early 1990’s I produced a little handout detailing some of the false teachings of Mr Branham.  Having quoted part of Proverbs 30:5-6 that read “Every word of God is pure… Add thou not unto his words” I then gave the following quote from his book ‘An Exposition of the Seven Church Ages’ that underscore his false ‘serpent’s seed’ teaching (based on Genesis 3:13 where Eve said “The serpent beguiled me”) as it has come to be known. This is what Mr Branham wrote –

‘Here is what really happened in the Garden of Eden. The Word says that Eve was beguiled by the serpent. She was actually seduced by the serpent… This beast was so close to a human being (and yet was pure animal) that he could reason and talk. He was an upright creature and was somewhat in between a chimpanzee and a man but closer to a man. (Cecil’s comment – Sounds like one of those evolutionary ‘missing links’ that are of course still missing)  He was so close to being human that his seed could and did mingle with that of the woman and cause her to conceive… man and animal did mingle…It happened right back there in the midst of Eden when Eve turned from Life to accept Death’

Despite the clear warning from Proverbs 30:5-6 not to “add” to God’s Word Mr Branham has added some repulsive thoughts and descriptions to what God’s Word says about this incident. There is not one word in the bible to suggest or confirm his fanciful description of some half ape/half man creature ‘beguiling’ Eve in the manner he has described.

The Apostle Paul makes reference to this Garden of Eden incident in his second letter to the believers in Corinth – Paul wrote “But I fear, lest by any means as the serpent beguiled Eve  through his craftiness, so your minds should be corrupted from the simplicity that is in Christ” [2nd Corinthians 11:3] and in the next verse he goes on to specify and identify his fear that the believers in Corinth might be open to false teachers proclaiming “another Jesus (by) another spirit (resulting in) another gospel”.

In Vines Expository Dictionary in the NT section on page 58 we read this ‘a strengthened form of the word ‘deceived’ in 1st Timothy 2:14 is rendered “beguiled” in 2nd Corinthians 11:13; the more adequate rendering would be ‘as the serpent thoroughly beguiled Eve’… this stronger form is used of Satan’s DECEPTION (Cecil – NOT SEDUCTION) of Eve, lit. “thoroughly beguiled”.

Paul’s over-riding concern was to ensure that the Corinthian believers would not have their minds deceived by false teachers in a similar fashion to Satan’s deception of the mind of Eve in the Garden of Eden. He was not in any way concerned or even remotely suggesting that they could possibly have their bodies corrupted in a manner similar to the vile (bestial), unscriptural teaching posited by Mr Branham – Paul’s concern was for the deception of minds.

2. In my little handout I went on to quote further from Mr Branham’s book – pages 321/322 –under his heading of The Laodicean Age’. Michael Moriarty in his helpful book ‘The New Charismatics’ wrote this on pages 49-50 ‘Branham believed Jesus’ messages to the seven churches in Asia Minor expounded in Revelation 1:20-3:22 were directed towards respective churches at various stages in history. Branham claimed that the angels (messengers) to the churches were men who appeared at divinely appointed times in church history to restore truths… Branham believed he was called to be the angel to the church of Laodicea – the end-time church. (Cecil – note the terminology that ‘squares’ with the ministry placing the adverts)  Branham listed the following men as the ‘messengers’ at various times throughout church history:

Now, returning to what Mr Branham wrote in his book under ‘The Laodicean Age’ we read

‘As a servant of God who has had multitudes of visions, of which none has ever failed, let me predict (I did not say prophesy but predict) that this age will end around 1977. If you will pardon a personal note here, I base this prediction on seven major continuous visions that came to me one Sunday morning in June 1933. The Lord Jesus spoke to me and said that the coming of the Lord was drawing nigh but that before He came, seven major events would transpire. I wrote them all down and that morning I gave forth the revelation of the Lord. The last and seventh vision was wherein I heard a most terrible explosion. As I turned to look I saw nothing but debris, craters and smoke all over the land of America. Based on these seven visions… I predict (I do not prophesy) that these visions will have all come to pass by 1977… I still maintain this prediction after 30 years because Jesus did not say no man could know the year month or week in which His coming was to be completed. (Cecil – The Lord stated clearly in Matthew 24:36 that only His Father knows the “day and hour” of His coming again, He repeated that truth again in Acts 1:7 and to His listeners in Matthew 25:13 the Lord said “watch therefore for ye know neither the day nor the hour in which the Son of man cometh”.) So, I repeat, I sincerely believe and maintain as a private student of the Word, along with Divine inspiration that 1977 ought to terminate the world systems and usher in the millennium’.

3.  In my leaflet I also cited several quotes by Mr Branham that show his rejection of the doctrine of The Trinity. – These were the quotes

‘The polytheistic religion of the enemy began with the Trinitarian doctrine. It was way back there in antiquity that the “one God in three persons” idea came into existence. How strange that our modern theologians have not spotted this; but evidently just as duped by Satan as their forebears were, they still believe in three persons in the Godhead (p 184)… Satan is a liar and the father of lies… And in his doctrine of the trinity has destroyed the multitudes and will destroy until Jesus comes (p 185)… There is ONE God with three titles, Father, Son and Holy Ghost. This mighty revelation is what the early church had and it must be restored in this last day along with the correct formula of water baptism (p 18)

In relation to what Mr Branham referred to as ‘the correct formula of water baptism’, in the section on Mr Branham in the ‘Dictionary of Pentecostal and Charismatic Movements’ on pages 95-96 we read ‘Branham’s insistence that believers baptised by a Trinitarian formula must be rebaptised in the name of “Jesus only” was a view shared by a number of Pentecostals

There’s another interesting little comment in this section on Mr Branham on page 95 – ‘By emphasising healing and prosperity and neglecting his Oneness theology Branham was able to minister in Trinitarian Pentecostal circles as well’ [Cecil – if the doctrine of ‘The Trinity’ was as Mr Branham claimed the means by which Satan ‘has destroyed multitudes and will destroy until Jesus comes’ then why would he ‘neglect’ it to enable him to minister in Trinitarian circles and presumably give the impression to these people that he and they were fellow Christians?]

Mr Branham claimed to have received an angelic visitation in May 1946 in which he was informed that he would be given supernatural healing powers and also the ability to ‘discern’ past events in the lives he was ministering to. In view of the fact that Mr Branham was clearly a ‘false prophet’ as has been earlier demonstrated is there any reason to doubt that this ‘angelic visitation’ and the ‘ministry of Mr Branham was evidence for the fears expressed by Paul in 2nd Corinthians 11: “But I fear lest by any means as the serpent beguiled Eve through his craftiness so your minds should be corrupted from the simplicity that is in Christ. For if he that cometh preacheth another Jesus [Cecil – as in ‘Oneness’], whom we have not preached, or if ye receive another spirit, which ye have not received, or another gospel which ye have not accepted ye might well bear with him (v 3-4)… For such are false apostles, deceitful workers, transforming themselves into the apostles of Christ. And no marvel for Satan himself is transformed into an angel of light (v 13-14”

In the advert reproduced earlier in this article you may have noticed something appearing as ‘light’ above Mr Branham’s head. In Michael Moriarty’s book ‘The New Charismatics’ Mr Moriarty wrote on page 51 ‘In a 1950 deliverance campaign in Houston, Texas, a photograph of Branham was taken that revealed a halo of light above his head. His followers took this as a further divine vindication of his ministry. Whether this halo was a manifestation of God or Satan or a doctored up or flawed negative, we will never know for sure. Nevertheless, the photograph became the most famous relic in the history of neo-Pentecostalism’. The ‘Dictionary of Pentecostal and Charismatic Movements’ reproduces this photograph and includes this comment – His followers described the light as “the pillar of fire” so that explains the use of that same terminology in the Belfast Telegraph advert.

A measure of the devotion of Mr Branham’s followers is captured in these quotes firstly from Michael Moriarty’s book on page 56 ‘Branham’s unexpected death in 1965 divided his ministry into several feuding groups. Many of his followers expected him to rise from the dead, believing that he was “the Lord Jesus Christ”, born of a virgin’ and then secondly from the ‘Dictionary’ previously mentioned on page 96 ‘He died in 1965, but many of his followers expected him to be resurrected, some believing him to be God, others believing him to be virgin-born’.

By way of conclusion I don’t think I can better the comments of Michael Moriarty as found on page 123 of ‘The New Charismatics’ where he writes ‘The danger of men like William Branham lies in the exalted view they have of themselves and the mediatorial role they play between the believer and the Word of God. Because their followers have been taught that everyone outside of their movement is wrong, or because thy fear divine fury coming upon them for disobeying their anointed leader, they read the Bible through the glasses of their prophet’s theology. Tragically, they see in the Bible what they are programmed to see and refuse to listen to anyone else’.