Dear praying friends and supporters of ‘Take Heed’,
In my last ministry letter (January 2017 – June 2017) I wrote the following

I am likewise going to be busy with speaking/preaching engagement between now and the end of the year (DV). Again, locally, I am scheduled to speak/preach 18 times (many of them Reformation-anniversary-related). Then late July-early August I shall be in the Isle of Man to preach 4 times and also give my 2-part Reformation talk. Then also over the first two weeks of September I shall be in Canada where to date I am scheduled to speak/preach on 7 occasions. Your prayers for all these plans will be greatly appreciated.

I am truly grateful to all those who prayed and herewith
is a short report on how all those plans went.

In the end the 18 local meetings ‘morphed’ into 30 meetings and whilst many of them were ‘Reformation-anniversary-related’, others were ‘ministry-related reports’ plus quite a number of others were preaching engagements. On every occasion I knew much help from the Lord and was greatly encouraged by many expressions of appreciation.

The ministry visit to the Isle of Man was also a time of blessing as I preached and gave my Reformation talks. In the wake of it I was then invited back to preach again and that took place on Sunday 12th November.

The ministry visit to Canada in September also grew from 7 to 10 meetings and once again these were times of blessing and encouragement. I was especially conscious of the Lord’s help when speaking in several churches for the first time. That visit involved 4 flights, a week of car driving and two Greyhound bus journeys so my thanks to all who prayed for safety in my travels.

As a result of the higher volume of meetings, coupled with extensive travelling, the ‘output’ of articles posted to the ministry web site and items added to the ministry YouTube site showed a marked reduction compared to the first six months of the year. Also, providentially there were not too many issues that needed addressing by way of fresh articles. However, there were a number of important articles issued and I would like now to fully reproduce one that is relevant to a high swathe of today’s young professing Christendom. It addresses a leading figure, CARL LENTZ, of HILLSONG (New York City), an Australian-based ministry (headed up by Brian Houston) that unfortunately is very attractive to much of today’s youthful ‘cultural-Christianity’

CARL LENTZ of HILLSONG NYC is the subject of a very helpful article for which I will give the link. This man is DANGEROUS to the cause of the Lord Jesus Christ as you will discern from the excerpts of interviews he has given on a number of occasions.

One of those interviews is with Oprah Winfrey and in the earlier interview segments Carl Lentz reminded me of someone who is also now a close friend of Ms Winfrey, namely Rob Bell – why does Mr Lentz remind me of him – for these reasons – (a) when asked a question he uses lots of words but never really addresses the issue clearly and authentically biblically, he’s like a bar of soap in the shower, he slithers about and (b) at the conclusion of his interview he goes on and on about ‘God’ and ‘love’ and of course that was the dominating theme of Rob Bell’s book ‘Love wins’ that basically
promoted unscriptural and heretical universalism.

1. My two main concerns about Carl Lentz are these Carl Lentz says Jesus rarely talked about ‘morality’ – by his use of the word ‘rarely’ is he insinuating that ‘morality’ was not a major issue where the Lord Jesus was concerned? I can immediately think of 2 examples where the Lord Jesus talks about ‘morality’ and clearly it is a major issue – (a) He tells the adulterous woman who had been brought to Him to “go and sin no more” (John 8:11) and (b) He lists all of the sins that proceed from the human heart and includes in the list “adulteries, fornications” and declares that “these are the things that defile a man” (Matthew 15:19 & 20).

2. When asked by Ms Winfrey if only Christians can be in relationship with God Carl Lentz answered ‘NO’ and he then explains that in his view Jesus is only a ‘road-marker, a map’ – on the basis of this answer alone this man is showing himself to have the character of a wolf in sheep’s clothing (Matthew 7:15). This relevant portion of his interview with Ms Winfrey begins @ 2.15.

In closing, mention is made of an upcoming (21-23 September) conference at Bethel, Redding CA with Bill Johnson and others, so this once more identifies the close links between these 2 dangerous groupings who are misleading so many today, especially young people. This is the link to the article.

PS Please note also that in the first video clip Carl Lentz says at one point ‘well my bible says’ – and what is his ‘bible’ (displayed on the screen behind him) – THE MESSAGE by Eugene Peterson which is not a ‘bible’ in the sense of a faithful translation but is rather a paraphrase that reflects Mr Peterson’s own (often questionable) thoughts on what the meaning of Scripture is.

I want also to make reference to another significant article posted to the web site and to quote some extracts from it as they demonstrate the often ‘mysterious ways’ of God’s sovereignty and providence. The article was titled as follows –

I have sadly just learned that BENNY HINN is due to be speaking again in Belfast (24th – 25th November) … In recent times, no less a person that Benny Hinn’s nephew, COSTI HINN has been telling of how he used to work for a time for his uncle’s ‘ministry’ (as a ‘catcher’). However, following a genuine conversion, Costi Hinn eventually disassociated himself from the teachings of ‘Benny Hinn Ministries’ (and other likeminded ‘ministries’). Recently he has spent time giving interviews and telling of how he came to that point and he has been graciously, but resolutely exposing the unbiblical
nature of what is taught by the likes of his uncle in ‘Word of Faith’’ circles.

Around the same time, Costi did a longer (hour-long) interview with Brannon Howse and you can access that interview on this link

Finally, in relation to recent articles posted to the web site, in view of the activity surrounding the 500th anniversary of ‘The Reformation’ that was marked by many on 31st October 2017, I took the opportunity to reformat and update this article –

The ‘gospel truth’ according to ‘Father’ Paul Symonds

This focussed very much on the ecumenical ingenuity and activity of ‘Father’ Paul Symonds in Northern Ireland over quite a few years. He was very adept at using evangelical-sounding language but also careful never to violate any of Rome’s teachings (false) and understandings (erroneous) of such language. Linked into the article were a number of video clips from a debate that ‘Father’ Symonds did for me with Rob Zins back in the 1990’s on the subject of ‘Getting to Heaven’. The purpose of updating and reproducing this article and video clips was to demonstrate, that where Rome is concerned, nothing doctrinally that the Reformers objected to has changed one iota. We still have much to thank the Lord for where ‘The Reformation’ is concerned and we need to pray much for our Roman Catholic neighbours and friends who are still ‘in bondage’ to the false Roman Catholic ‘system of salvation’.

Dear Cecil, it was a joy to have you come and preach the Word of God to us. What a blessing that we can fellowship together in the gospel. We always look forward to having that time with you … Give our love and greetings to your dear wife, Margaret.  DS

Hi Cecil, praise God that you are home safe and sound and reunited with your beloved wife. (Please pass along warm greetings for us). Thank you so much for coming out! I’ve continued to receive much good feedback from your presentation … I always enjoy sitting down to talk with you. Lord willing, we will do so again in the not-too-distant future.  JT

Hello Cecil! Please pardon my delay in sending this message to you. I was greatly blessed by your visit with us two Sundays ago. As a congregation, we were all greatly blessed by the message that you brought to us. May the LORD richly bless you and continue using you in His service as He enables you.   FM

Greetings in Jesus Name dear Cecil. Since I’m subscribed to your You Tube Channel I just listened to that priest (’Father’ Paul Symonds). So sad but I’m thrilled that the Lord delivered me from that church. Praise God. Blessings to you and Margaret.  J

A while back I was asked a question about the occult and mediums and came across your excellent article ‘Today’s Psychic Fare’ and that was exactly what I was looking for. Years ago, similar articles were common place, but it was hard to find a good scriptural article until I came on your website! So ever thankful for the Lord’s helps through your ministry.  WR

In August of this year, Margaret and I celebrated our Pearl Wedding Anniversary and on the actual day, whilst away for, as we say in this part of the world, a ‘wee break’, with the kind help of a passer-by, some photos were taken to mark the occasion as we were out walking. Enclosed herewith is one of those photos (see on page 6) and we hope you will like it. We hope
too that you will also use it to continue to pray for us and the Lord’s work here at ‘Take Heed’. Finally, in closing, once again if you would like to continue to support ‘Take Heed’ practically, then please make use of the enclosed yellow ‘support letter’. (see on page 5). ONLINE DONATIONS in support of ‘Take Heed’ can also be made by going to this link –

With every good wish in Christ for 2018
Cecil Andrews 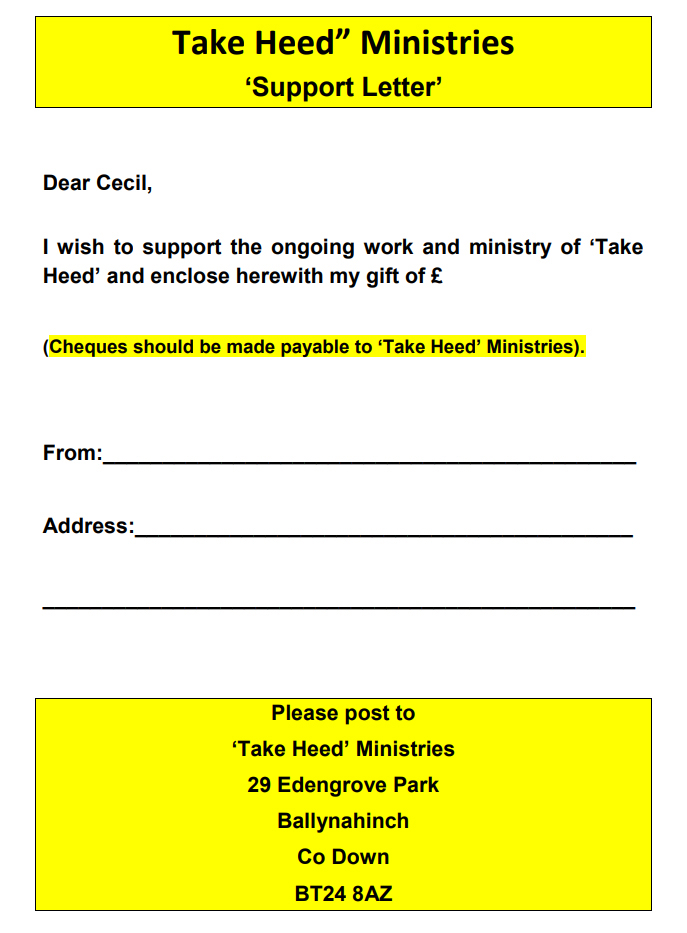 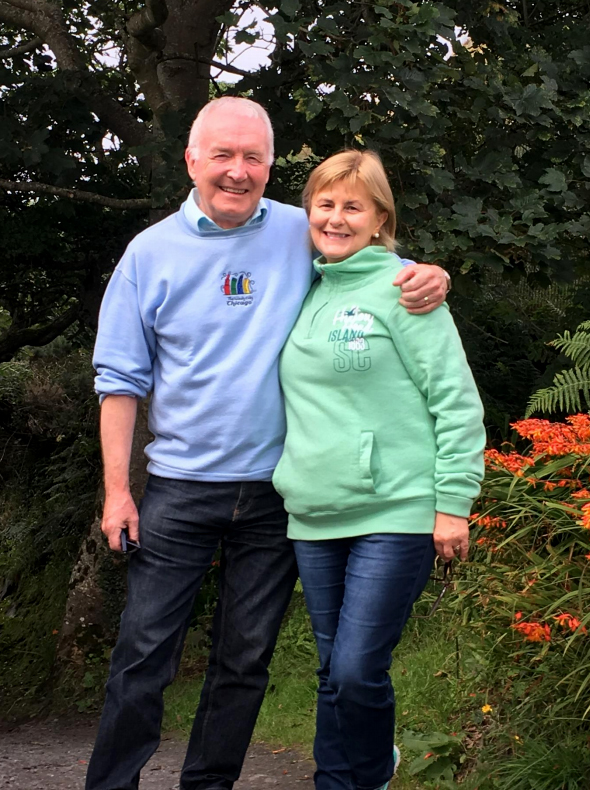