ALPHA team up with RICK WARREN for their ‘LONDON LEADERSHIP’ conference

ALPHA have lined up RICK WARREN to be one of the main speakers at their ‘Leadership Conference’ to be held in the Royal Albert Hall in London on 5-6 May. Full details can be found on

The ALPHA Course is a spiritually ‘deadly’ so-called Bible course and with his ‘ministry’ track record it is really no surprise that Rick Warren would feel at home in such surroundings.

ALPHA NEWS (November 2006 – April 2007) contained an article entitled ‘US pastor Rick Warren says “Check Alpha out”’ and in it we read – ‘Rick Warren, founder of the Purpose Driven network and one of the most influential pastors in America has urged church leaders to “check Alpha out”… He was speaking about Alpha on a special video filmed in India where his organisation is partnering ALPHA and the BILLY GRAHAM ORGANISATION in the “My Hope India” project through which MILLIONS are expected to become Christians next spring (Cecil: Have these people got some sort of hot-line to heaven so that they can predict who and how many GOD will save, if any – sheer unbiblical ‘hype’)…

It can be used with seekers or inquirers. It is a good way to bring people to a small group study who would never be caught dead in a church – they’ll take that first step, they’ll sit on a couch with some friends and examine the claims of Christ and what it really means to be a follower of Jesus (Cecil: There’s some ‘emerging-type speak’ being used here about becoming a ‘follower of Jesus’ rather than being ‘converted’ to Christ – I deal with this terminology in my article –  Click Here ) **see comments below

MILLIONS of people have come to Christ through this way’ (Cecil: There’s an old saying that ‘paper refuses nothing’ and certainly the ALPHA news has clearly not refused to accept this unsubstantiated and I believe over-optimistically speculative claim).

** Subsequent to writing this portion about ‘emerging-type-speak’ I read a helpful article in the February 2014 ‘Evangelical Times’. It was called ‘Fresh Expressions’ and written by William Wade. I want to quote some relevant portions from it –

‘With continuing claims of declining attendance in churches across the UK, it is commendable that some within the church are not only saddened by these statistics but also moved to respond to them. One such movement is “Fresh Expressions”… Setting out a basis for a new, fresh approach to doing church, it is proposed that Fresh Expressions favour fellowshipping in smaller groups, rather than larger, more formal settings… Yet, what is offered by the Fresh Expressions movement is the abandoning of the larger meeting and the finding of what it refers to as “community” which can only it seems to be found in the smaller gathering…

What we also find in Fresh Expressions is that the gospel is reduced to following what it and the emerging church term the “way of Jesus”. The basic proposal of following in the way of Jesus is that when we encourage others to do what Jesus did – in the form of good works, loving our neighbours, becoming involved in social action and the redemption of creation (Cecil: a ‘green agenda’) – then we lead others to become Jesus’ followers or disciples. BUT is this the biblical definition of becoming a disciple?

We need to remember that, no matter how contextual the local church is to become, the gospel message is that Jesus Christ was wounded for our transgressions (Isaiah 53:5) and that the reason for Jesus coming to earth was to save people from their sins (Matthew 1:12).

A quick glance at the “stories” section of the Fresh Expressions website will reveal many innovative and creative experiments, and even missional approaches, but there will be little talk of conversion, sin, the cross, repentance or the blood of Christ. (Cecil: The sentiments expressed in these words mirror my own observations about “testimonies” that regularly appeared in ALPHA NEWS – you can see my comments by going to https://www.takeheed.info/pdf/January-2014/Alpha-attend-or-avoid.pdf and scrolling through from the bottom of page 37 where I write “Tim Chapman wrote…” through to page 40 where I write “questionable testimonies”)

Also of great alarm is that, IF the gospel is spoken of, it is spoken of in terms of the life of Jesus and the great pursuit of living as he did. In other words, if a person can somehow emulate his loving ways, then that person gradually becomes a disciple by deeds rather than by repentance. There is no room within the Fresh Expressions movement for the old practice of crisis conversion. This has been clearly pushed aside for the “journey” approach… When we and specifically when Fresh Expressions (or any expression which sacrifices truth on the altar of engaging with the local context) encourage culture to shape the gospel message, then we simply re-present a rebranded liberalism to a world lost in sin and seeking true redemption’.

In addition, the text of what I wrote about ALPHA in my book ‘Try the spirits: Volume 1’ can also be read by going to –

Another article that I compiled in which I show the ‘ecumenical support’ for ALPHA can be viewed on the following link and just as an aside one of those endorsing it is another of the guest speakers lined up for May – Mike Pilavachi. The link is –

Returning briefly to the ‘ecumenical support’ for ALPHA it was never made clearer than when Nicky Gumbel visited the Vatican and met with Pope John Paul II in February 2004. The following photograph was in ALPHA NEWS (March – June 2004) 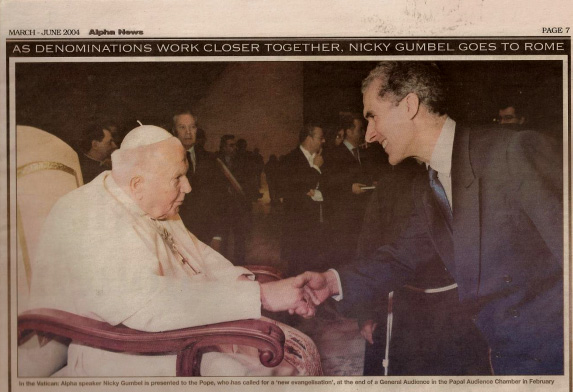 ‘After returning from Rome, Nicky Gumbel said “It was a great honour to be presented to Pope John Paul II, who has done so much to promote evangelisation around the world. We have been enormously enriched by our interaction with Catholics in many countries’.

This is the same Pope who wrote in the foreword to the 1994 ‘Catechism of the Catholic Church’ – ‘I declare it to be a SURE NORM for teaching the faith’ – and of course that Catechism contains and promotes all the soul-destroying false teachings and heresies enshrined in Roman Catholicism – so much for Nicky Gumbel’s claims that the Pope was doing so much to promote ‘evangelisation’.

Finally, a talk that I gave a few years ago on Rick Warren himself and his ‘ministry’ can also be heard on this link