As a hopefully helpful backdrop to this article perhaps I could invite you, the reader, if you have not already done so, to read the article UNITARIANISM that was posted to the ministry web site last year. This link will take you to that article –

In that article you will see that UNITARIANISM views the Lord Jesus Christ as merely a man and not the God-Man revealed to us in God’s Word (1 Timothy 3:16). That error is very much to the fore in what we will consider later in this article. Over the 2017 Christmas festive season my attention was drawn to the fact that a reasonably well-known and popular Christmas carol, ‘It came upon the midnight clear’ was written by a UNITARIAN minister called Edmund Sears. I was given a copy of a letter published recently in Evangelicals Now in which the author (Professor Colin Reeves, Thurlaston, Rugby, who kindly agreed to my quoting him) wrote –

‘Edmund Sears was an American Unitarian minister/theologian; his hymn has been described as “quintessentially Unitarian” because, as anyone can see, it is a Christmas hymn that carefully avoids mentioning the Incarnation. “Hail the Incarnate Deity” (Wesley) would have been anathema to Unitarian congregations!… Sears himself spoke of Christ as in some sense an “incarnation of Divine Life”, and was thus deemed “conservative” among Unitarians. He claimed to experience Jesus in daily life, but he denied original sin, rejected substitutionary atonement, and denied the resurrection in any identifiably biblical sense. He viewed the Holy spirit as merely a “Divine Influence” and was sympathetic to some teachings of Swedenborg**. Hardly surprising then that his carol fails to reflect biblical orthodoxy’.

I then came across an interesting article concerning Mr Sears and his carol and there is a very revealing quote in it that seems to call into question just how narrow his UNITARIAN conviction was. The author of the article notes astutely ‘This may be the only commonly sung Christmas carol in our hymnals that does not mention the birth of Christ! The focus is rather on the song of the angels, “Peace on the earth, good will to men,” taken from Luke 2:14.’ Then later we read, and this is the ‘revealing quote’ I mentioned, ‘Sears, though a Unitarian, wrote in Sermons and Songs of the Christian Life (1875), “Although I was educated in the Unitarian denomination, I believe and preach the Divinity of Christ.” This is the link to that article –

Research also led me to an article that sheds much light on the wide-ranging and perhaps what I would describe as, ‘evolving’ views of Mr Sears and it is clear that he was by no means linguistically a typical ‘Orthodox Unitarian’. That article is located on

In that article we read – ‘Sears’s friend, Lydia Maria Child, who lived in Wayland and shared his interest in Swedenborgian** mysticism, sometimes attended his services.’ Earlier I also identified with red asterisks the reference made by Professor Reeves to ‘Swedenborg’ so what did Emanuel Swedenborg (1688-1772) believe? Well, here are a few quotes about him taken from ‘Larson’s New Book of Cults’ –

‘At the age of 52 his life changed abruptly when he answered what he felt was a divine calling to become a revelator of the symbolic meanings in Scripture. Swedenborg developed mediumistic abilities (automatic handwriting and clairaudience – hearing something not actually audible to others) and practised astral travel, journeying to the spirit world to communicate with good and evil angels (deceased humans). The messages from these beings convinced him that the Bible needed special interpretation… His visions included conversations with persons whom he identified as Luther, Calvin, St. Augustine and the Apostle Paul… In Swedenborg’s theological system, those who die enter an intermediate state where they prepare for heaven or hell. In hell, one becomes an evil spirit, but in heaven an angelic status awaits. Either existence is spiritual since there is no bodily resurrection… The historic Christian concept of the Trinity is discarded, along with the vicarious atonement – an “abomination” and “mere human invention” according to Swedenborg… The personality of the Holy Spirit is specifically denied and Jesus Christ is God alone, an “indivisible… Divine Essence” manifested as three principles.’
Returning to Mr Sears, Orthodox Unitarianism is clearly comfortable with the lyrics of ‘It came upon the midnight clear’ as they are reproduced in full in the ‘Hymns of Worship’ which are ‘For use in Unitarian, Free Christian & Kindred Congregations’. In that hymnal these are the verses published in it –

It came upon the midnight clear,
That glorious song of old,
From angels bending near the earth
To touch their harps of gold!
Peace to the earth, good will to men,
From heaven’s all gracious King!
The world in solemn stillness lay
To hear the angels sing.

Still through the cloven skies they come
With peaceful wings unfurled
And still their heavenly music floats
O’er all the weary world;
Above its sad and lowly plains
They bend on hovering wing.
And ever o’er its Babel sounds
The blessed angels sing.

Yet with the woes of sin and strife
The world has suffered long;
Beneath the angel-strain have rolled
Two thousand years of wrong;
And man, at war with man, hears not
The love-song which they bring:
O hush the noise, ye men of strife,
And hear the angels sing.

And ye, beneath life’s crushing load
Whose forms are bending low,
Who toil along the climbing way
With painful steps and slow;
Look now! For glad and golden hours
Come swiftly on the wing:
O rest beside the weary road,
And hear the angels sing.

For lo! the days are hastening on,
By prophet-bards foretold,
When, with the ever-circling years,
Comes round the Age of Gold;
When peace shall over all the earth
Its ancient splendours fling,
And the whole world send back the song
Which now the angels sing.

In conclusion, as regards this carol, you will note that I have highlighted the line Comes round the Age of Gold. When last I sung this, I had in mind the return of the Lord Jesus Christ that Paul mentioned in Titus 2:13 in these words “Looking for that blessed hope and the glorious appearing of the great God and our Saviour, Jesus Christ”. Knowing what I now know about Mr Sears, he clearly had a different anticipation in mind as explained in my first article on Unitarianism where I wrote the following concerning the generally accepted beliefs of Unitarianism –

5. The Progress of Mankind Upward and Onward Forever

This sounds very like the phrase, ‘The inevitability of human progress’ which was so common in philosophical writings at the beginning of the century… those were the days when Walter Rauschenbusch could write that ‘The swiftness of evolution in our own country proves the immense latent perfectibility in human nature’ (Christianity and the Social Crisis’ p 422)

Two world wars made the advocates of inevitable progress a little less glib but did not entirely silence them. Men like Sherwood Eddy in his ‘God in History’ (1947) and Shirley Jackson Case in his ‘The Christian Philosophy of History’ continued to argue for the upward development of the race and the establishment of the Kingdom of God on earth through a process of social evolution. 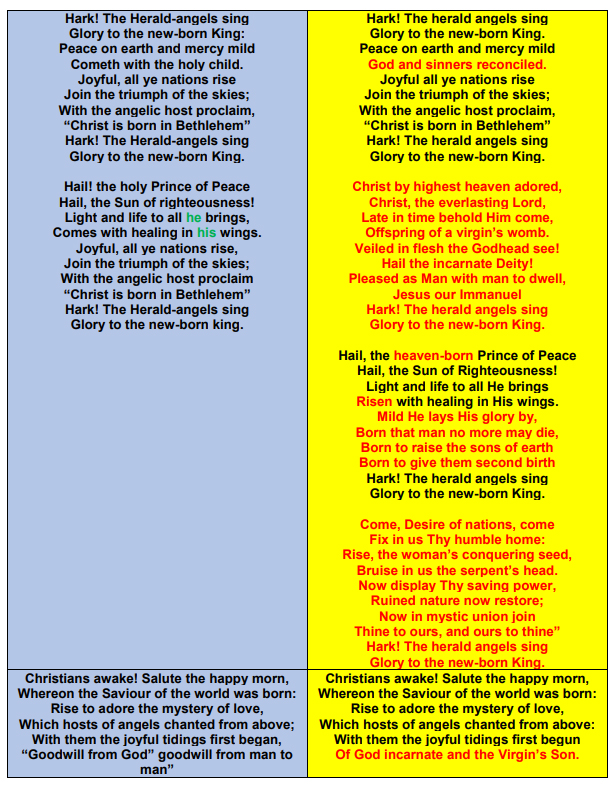 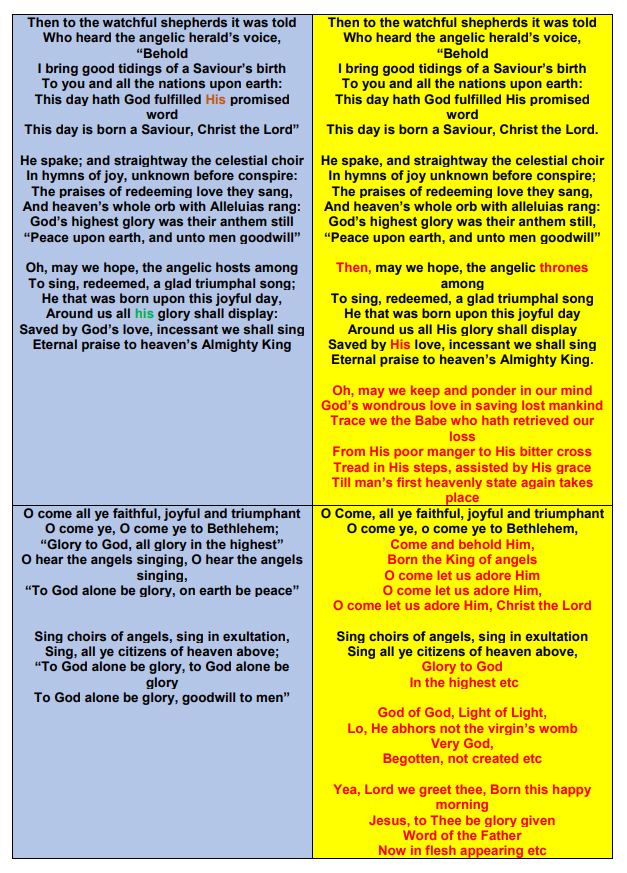 Just to return briefly to ‘It came upon the midnight clear’ it so happened that it featured in the Queen’s Christmas 2017 televised address to the nation. You can watch the broadcast by going to this link and you can check out my noted observation.

(The camera shot of the young Muslim girl in the Commonwealth Youth Choir (starts @ 6.57) just happened to coincide with the singing of the lyrics
‘Peace on the earth, good will to men’ – knowing how in the media Islam is erroneously and continually referred to as  ‘The Religion of Peace’ was this camera shot just purely coincidental? – perhaps just a cynical thought on my part)

As a final thought I was drawn to 2 scriptures that seem to have suitable application to Unitarians – “they have a zeal for God but not according to knowledge” (Romans 10:2) and “this people draw near unto me with their mouth, and honour me with their lips, but their heart is far from me” (Matthew 15:8). – utterly tragic.