According to a report in the Daily Mail of Friday 18 January 2008, British government ministers ‘have adopted a new language for declarations on Islamic terrorism. In future fanatics will be referred to as “pursuing anti-Islamic activity”. Home Secretary, Jacqui Smith said that extremists were behaving contrary to their faith, rather than acting in the name of Islam…In one passage she said “As so many Muslims in the UK and across the world have pointed out, there is nothing Islamic about plotting murder, pain and grief. Indeed if anything these things are anti-Islamic…In her speech Miss Smith said extremists who use the internet to radicalise young children would be pursued in the same way as paedophiles [let’s hope they’re more alert than the South Yorkshire police for it was reported on Wednesday of this week – ‘A paedophile named on a list of the UK’s “most wanted” was arrested but later released after police failed to recognise him. South Yorkshire Police officers only realised who Joshua Karney was after he was fined for being drunk and released. Karney, 30, is one of five of the UK’s most wanted sex offenders after going missing from Lancashire in 2005’]…Mosques will be helped to root out extremism with Imams encouraged to learn English’.

Quite frankly one does wonder exactly what planet Jacqui Smith and her government colleagues are living on. Asking Mosques ‘to root out terrorism’ is like asking Dracula to run the blood transfusion service. If she wants an Islam that is not going to ‘plot murder, pain and grief’ and is not going to ‘radicalise’ and ferment ‘extremism’ then she is going to have to re-write the Koran by editing out large and authoritative portions of it.

Dr Patrick Sookhdeo in the ‘Author’s Note’ at the beginning of his recently published book ‘Global Jihad: The Future in the Face of Militant Islam’ wrote this –

‘Radical Islam has declared war on the West. It is the manifestation of a theology that is rooted in classical Islam. Traditional Islam which, developing under colonial pressure, saw a break from violence, from the totality of shari’aand from political activism, is now being gradually subsumed into classical Islam…The Muslim world – its clerics, theologians, political leaders and umma – must rise up and engage in a radical reformation of Islam. THIS REFORMATION WILL RE-INTERPRET THE KORAN SO AS TO REJECT RELIGIOUS VIOLENCE will advocate a total separation of religion from state and will argue for full equality of all citizens under a law based on international norms not on shari’a. This will include the reinterpretation of the Medinan Koranic passages on violence, the rejection of the hadith and sunna as authoritative sources and the adaptation of shari’a from a public legal code to a personal code of conduct and morality…Many people [like Jacqui Smith and her fellow government ministers] are at pains to distinguish “Islamist terrorism” from what they believe to be the unacceptable term “Islamic terrorism”. HOWEVER THIS IS REALLY A MEANINGLESS DISTINCTION FOR, AS THIS WORK WILL SHOW, ISLAMISM IS SIMPLY THE ESSENCE OF CLASSICAL ISLAM AND VIOLENCE AND TERROR ARE FOUND WITHIN BOTH OF THEM’.

In the flyleaf of the front cover of this book it also states ‘This book is aimed primarily at decision-makers in politics, security, intelligence and the military, but will be of interest to any reader who seeks to understand Islamic violence in the world today’.Let’s hope and pray that all of the UK politicians and others mentioned do read this book and in consequence fulfil their God-given duty as outlined in Romans 13:1-4 “the powers that be are ordained of God…rulers are not a terror to good works but to evil. Wilt thou then be afraid of the power? Do that which is good and thou shalt have the praise of the same. For he is the minister of God to thee for good. But if thou do that which is evil, be afraid; for he beareth not the sword in vain; for he is the servant of God, an avenger to execute wrath upon him that doeth evil”.

There are moderate Muslims who would like to see an Islam reformed along the lines outlined in Dr Sookhdeo’s ‘Author’s Note’ but to do so will in reality be an overturning of the claimed divine revelations given to Mohammed. If there are Muslims who want to pursue such a path, and I do believe there are, can they not see the obvious namely that these ‘divine revelations’ are clearly not that and so rather than attempting to reform Islam they should in fact be rejecting it in its totality. What possible validity could there be in a religion where sinful man has the right to abrogate and ignore true ‘divine revelation’?

Western governments are facing a militant classical Islam that is acting in full concord with the teachings of the Koran and other Islamic authoritative sources and it is quite disingenuous of people like Jacqui Smith to suggest that this violence is ‘anti-Islamic’. It is not and so the government, in order to fulfil its obligations as outlined in Romans 13:1-4 must adopt a radically different approach and use legislation to severely curtail the practice of any religion that sanctions and gives public manifestations of its beliefs and teachings such as those that are contained in the following photographs that were emailed to me today. 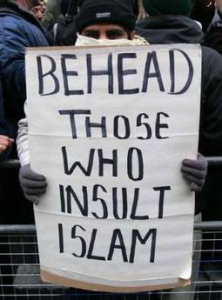 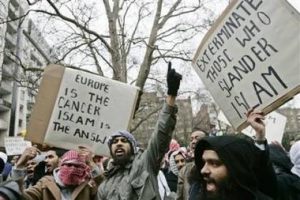 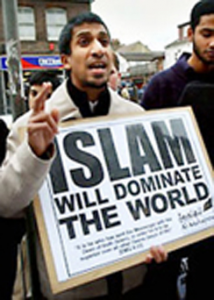 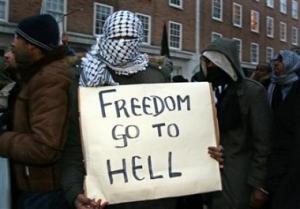 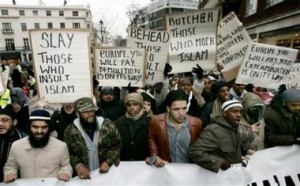 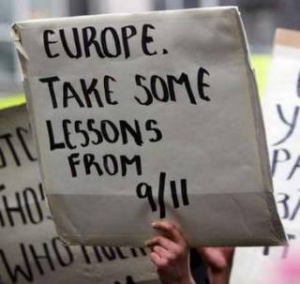 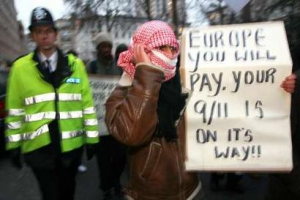 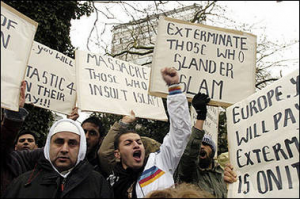 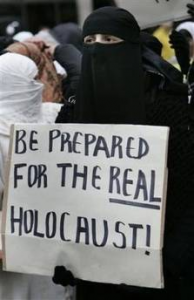