I was recently alerted by a posting on Facebook to a planned ‘ministry’ visit to Ireland in November by RODNEY HOWARD BROWNE. This is the item that was posted to Facebook – 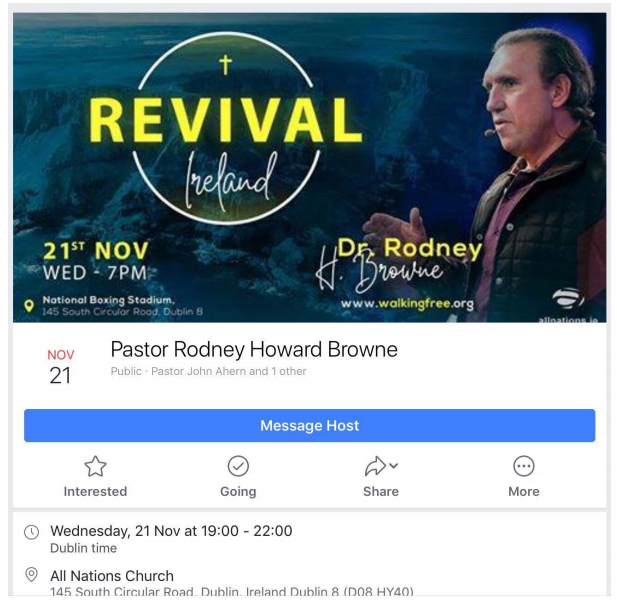 The hosting church has a short write-up about this upcoming visit on this link
http://www.allnations.ie/events/revival-ireland/
and this is what the write-up says

We are excited to be able to co-host Pastor Rodney Howard Browne,
originally from South Africa but based in Tampa, Florida. He is
speaking in 13 different cities across Europe. His heart is to see
revival across this island and we are encouraging people to bring their
families & friends who do not know Christ. He also moves in gift of
healing and flows in the power of the Holy Spirit. Admission is free but
an offering will be taken up on the night. Hope to see you there!!

In recent times Rodney Howard Browne has moved in influential circles as this photo shows – here he (and his wife Adonica) are pictured along with other questionable ‘Christian’ figures in the company of President Trump who relies heavily on spiritual ‘guidance’ from Paula White (in the photo – she offered the main prayer at President Trump’s inauguration). 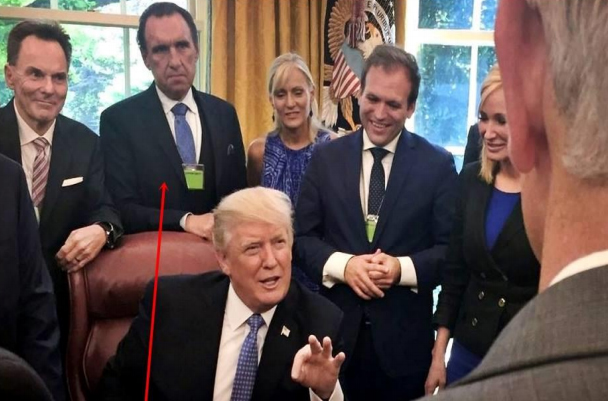 I first ‘encountered’ Rodney Howard Browne in the mid-1990s when the so-called ‘Toronto Blessing’ was taking much of the professing ‘Christian’ world by storm. Mr Browne was the main ‘purveyor’ of a feature that became readily identified with this claimed ‘Blessing’ namely the phenomenon of so-called ‘Holy Laughter’.

On two occasions I spoke publicly about the so-called ‘Toronto Blessing’ and each talk featured both references to and videos of a then, much fuller-figured Rodney Howard Browne. You can see what I showed and said by going to these links –

(scroll to RHB video which is just after 40.00 and watch to end)

The first video segment shows diabolical, so-called ‘ministry’ in full-flow and all of it being overseen and orchestrated by Rodney Howard Browne AND his close friend, the rank heretic, KENNETH COPELAND. At the start of the second video you can see Rodney Howard Browne basically being commissioned byKenneth Copeland to go forth and spread this ‘blessed holy laughter’

Then secondly you can watch his ‘antics’ on this link (scroll to RHB video which starts @ 32.44)

The first three minutes see Rodney Howard Browne interacting with an almost dumb-struck pastor who eventually collapses – to the best of my knowledge that pastor was Karl Strader whose son, Stephen, hosted the so-called ‘Lakeland Revival’ with TODD BENTLEY in 2008 – that ‘revival’ attracted many of the figures associated with ‘Toronto’ who along with other NAR figures came down to Lakeland and ‘commissioned’ and ‘prophesied’ over Todd Bentley. Then a few weeks later ‘the wheels came off’ that ‘revival’ as it became public that Mr Bentley was having an adulterous affair with someone working backstage at the ‘revival’. These Wikipedia links supply helpful information on the Spaders, Lakeland, the ‘revival’ and the Rodney Howard Browne (and Paula White) links to these pastors and churches.

Then from 35.35 on the video you can watch Rodney Howard Browne
disgustingly and supposedly reading God’s Holy Word – would the Holy Spirit who inspired God’s Word cause someone reading it to act in such a
disrespectful and unholy way – I most certainly think not.  I would then recommend that you watch through to 44.39 as I cover informative and dismaying recommendations that Mr Browne received when he visited England and I also quote a report of the offensive language used by Mr Browne when some people had the discernment to leave one of those meetings. Finally, I quote how Mr Browne reacted to the witness solid
Christians who handed out leaflets to people as they were going into his
meetings in Perth, Australia.

Has the ‘ministry’ of Rodney Howards Browne changed over the years since his ‘Holy Laughter’ days when he blasphemously referred to himself as a ‘holy ghost bartender’ – well certainly nothing had apparently changed by 2015. Mr Browne ‘ministered’ at Kensington Temple in London, (pastored by Colin Dye, one of the ‘endorsements’ quoted in the last video segment above). This link will take you to a report of that meeting that was obviously written by a ‘fan’ of Rodney Howard Browne –

Judging by his past record I have no doubt that the meeting which Rodney Howard Browne will ‘minister’ at in Dublin will be ‘exciting’ But equally I am also fully persuaded that it will not be ‘edifying’ for any of God’s true children who may go to it and for that reason my advice is clearly to AVOID (Romans 16:17). In closing, there is a helpful critique of Rodney Howard Browne and his ‘ministry that was written at the height of ‘Toronto’ and it is located on this link –

and‘ under a heading of ‘IDENTIFICATION WITH FALSE TEACHERS’ we read

‘Howard-Browne was an associate pastor of Rhema church in Johannesburg, before moving to the United States in 1987, identifying with fellow Rhema Church leader, KENNETH HAGIN, a person whose teaching has also been shown very clearly to be heretical ‘