Many years ago, friends and fellow-contenders living in The Netherlands sent me videos of a large 1998 gathering held by Rome in Holland to celebrate ‘Mary: Lady of all Nations’. This is just one of the many baseless and unscriptural titles ascribed by the Roman Catholic religion to Mary. In this article, I want to focus upon a claimed ‘Eucharistic Miracle’ that is detailed in the opening portion of the first video and so to begin with here is a link to enable you to watch that portion of the video –

Having watched the video, you perhaps now understand why I included the phrase ‘Hard to stomach!’ as a subtitle to this article. This supposed ‘miracle’ centres totally around the claim that a sick man, who had received a Roman Catholic ‘consecrated wafer’, later vomited it up and, despite having been thrown in the fire, it refused to be destroyed but instead was ‘reconstituted’ and ‘danced’ above the flames of the fire next morning.

The history of this ‘consecrated wafer’ over the ensuing centuries is then traced and it was so sad to hear of the blind devotion so many Roman Catholics had for this ‘lying wonder’ (2 Thessalonians 2:9).

Then in 1945 it is claimed that Mary began to appear in apparitions in Amsterdam and eventually at one stage laid claim to the title ‘Co-redemptrix’. This apparition was sinfully self-exalting and bore no resemblance to the Mary revealed to us in the Bible.

In his book ‘Messages from Heaven’ former Roman Catholic, Jim Tetlow, in chapter 15, which is titled ‘The Queen’s Destiny’, wrote the following –

“Once more I am here – the CO-REDEMPTRIX, MEDIATRIX and ADVOCATE is now standing before you. I have chosen this day: on this day, the Lady will be crowned. Theologians and apostles of the Lord Jesus Christ, listen carefully. I have given you the explanation of this dogma. Work and ask for this dogma. You should petition the Holy Father for this dogma… On this date ‘The Lady of all Nations’ will receive Her official title of ‘Lady of All Nations’ …

“Try to understand the reason for My coming on this day. The Lord Jesus Christ has selected this great day for ‘the Lady of All Nations’. Her mission is to establish unity among Her nations. She is sent to make one great Community of Her nations. To gather all nations into one Community, that is the task set before the world in this present time, which I have heralded repeatedly”. These astonishing messages have been embraced by multitudes who follow “Our Lady’s” agenda. For example, over six million individuals have petitioned the Pope to declare Mary the CO-REDEMPTRIX! Furthermore, millions of “the Lady of All Nations” prayer cards have been distributed and prayed around the world’ (pp 195-197).

In response to these supposed ‘revelations I would direct readers to a number of helpful items already available through the ‘Take Heed’ web site. These items are –

(I would suggest omitting viewing chapters 1 and 3)

Should Mary be declared Co-redemptrix?

In the next section of this article I want to quote some short extracts from a book that I have and in which specific reference is made to this supposed ‘miracle’ in Amsterdam. The book is ‘Quite Contrary: A Biblical Reconsideration of the Apparitions of Mary’ and it was written by Tim Kauffman who gave the talk on the last of 3 links that I cited earlier. Tim wrote –

‘Having examined their fruits and teachings, I imagine that it would be rather difficult to proceed without actually proposing what I believe these numerous apparitions are really trying to do. Obviously, they are not Mary and obviously, they are lying about their identity and therefore are not from Heaven as they claim. But what option does that leave us? Is there some neutral spiritual middle ground between the angels of Heaven and the angels of hell?… If there is, I don’t believe its description could be found in Scripture… Which means that if the apparitions of Mary do not come from the highest, holiest pinnacles of Heaven, we have no choice but to acknowledge that, in fact, they have their origins in the deepest, darkest recesses of the pits of hell. And since they teach a false gospel, we know quite simply that they are demonic. They may well be the most prolific demonic manifestations of our times…. Could one demon be so active in so many different locations? If not, has Satan been so clever as to coordinate such a complex, interrelated concert of alleged Marian appearances? He is certainly capable, but again it is difficult to tell.

But we do have the testimony of the apparitions which seem to indicate that it is all a coordinated effort and may even be the work of one demon in particular. For example, when the apparition of Mary appeared to the children of Melleray Grotto, Ireland in 1985, it said “I will show myself to more people in more places” and when it appeared again in Bessbrook Grotto, Ireland two years later, it made specific references to the Medjugorje apparitions “The messages here are the messages in Medjugorje”…

These cross-references to other apparition locations are not uncommon, and when an apparition of Mary wishes to authenticate its appearance, it will often refer to previous apparition sites and messages to do so. Mary Ann Van Hoof of Necedah, Wisconsin, USA reported in 1950 that the apparition of Mary had told her she was appearing in order to warn the people of the world “as I warned you at Fatima, Lipa (Philippines) and La Salette”. Likewise when apparitions were reported in AMSTERDAM, Holland between 1945 and 1959, the defense of their authenticity was that they seemed to build upon the “eschatological landmarks” of the apparitions of La Salette and Pontmain, France: Fatima, Portugal and Beauraing, Belgium, all four of which had by then received the official approval of the Church’ (pp 123-125).

‘In 1950 Pope Pius XII proclaimed the doctrine of the Assumption of Mary, but did so appealing to the two doctrines that the apparitions had helped Pius IX establish: The Immaculate Conception of Mary and the Infallibility of the Pope… thus, the Assumption rested on two very significant pillars that the apparition (an apparition to Catherine Laboure in Rue de Bac, Paris in 1830) had helped erect, pillars which simultaneously demanded the proclamation of the dogma and made the proclamation possible. Mary was assumed into Heaven because she was Immaculate and the papacy could proclaim the Assumption because it was infallible.

This may seem at first to be a tremendous and even unnecessary amount of effort for the apparitions to exert just to see these doctrines established but without them the apparitions of Mary have no justification for their appearances. They simply could not be appearing bodily from Heaven were it not for the Assumption doctrine which stated explicitly that Mary had been taken up body and soul into Heaven when she left the earth. Without this critical doctrine, the apparition would be at a loss to explain how it could be physically appearing to us prior to the general resurrection… The apparition needed the doctrines so that there would be a logical explanation for its physical interaction with the visionaries…

And scarcely had the papacy proclaimed the Assumption than the apparition was beginning a new campaign for the final Marian dogma to be announced. The apparition of Mary in AMSTERDAM from 1945-1959 insisted to visionary Ida Peederman that it was time for the church “to go further than it had yet gone. In these last days, with the forces of Satan gathering to do battle with Mary and her followers, it was time… for the Church to proclaim her, as she had asked, Co-Redemptrix, Mediatrix, and Advocate”. The road from AMSTERDAM to Rome has not been a long one. This movement in support of proclaiming the final doctrine of Mary is still strong and gaining support today… Perhaps the papacy will respond again to the requests of the apparitions as it has in the past…

Even Mother Teresa has joined in the effort to see this new doctrine proclaimed. She writes, “Mary is our Advocate who prays to Jesus for us. It is only through the Heart of Mary that we come to the Eucharistic Heart of Jesus. The papal definition of Mary as Coredemptrix, Mediatrix and Advocate will bring great graces to the Church” …. The apparitions have proven already that they are capable of using the papacy to establish doctrine almost at will…

But the final doctrine does pose a great difficulty to the simplicity of the Gospel of Jesus Christ, and in that light, we can see clearly the purpose of the apparition… it will represent the complete transfer of all of the messianic attributes of Christ to Mary, or rather to the apparition that claims to be Mary; His sinlessness, His resurrection, His role as Redeemer, Mediator and Advocate… For all practical purposes the final Marian doctrine would not only make salvation through CHRIST ALONE obsolete but would also make it possible to call oneself “Christian” without even the smallest understanding of Christ’s unique role in redemption… And the Gospel really must be the core issue in any discussion regarding the true identity of the apparitions’. (pp 149- 153).

Returning again to the video, should we really be surprised at the reaction of those who had been gloriously saved out of the darkness of Roman Catholicism to what was being promoted and observed in Amsterdam under the guise of a ‘Eucharistic Miracle’? They could clearly recognize deceptive and damning demonic superstition which is more than can be said for some of today’s prominent ‘Protestant’ leaders.

‘And when the Immaculate Conception doctrine at first met with skepticism, the apparition was quick to lend it support. Only four years after Pius IX proclaimed the doctrine, the apparition appeared again, this time in LOURDES, France, to a young girl named Bernadette Soubirous. During the first encounter when the apparition was asked its identity, it responded by saying “I am the immaculate Conception,” a statement which Bernadette would quickly relate to her priest and a claim which would in the eyes of many provide the confirmation the doctrine desperately needed in order to be universally accepted…And so it was that the apparition of Mary, by confirming the validity of the Immaculate Conception, assured that the “baffling new dogma” would be accepted by the people quickly and without further question.’

Before that last quote, I was lamenting the lack of discernment by some “prominent ‘Protestant’ leaders” and by way of example here is a link to a report concerning the previous Archbishop of Canterbury, Rowan Williams and his visit to Lourdes in 2008 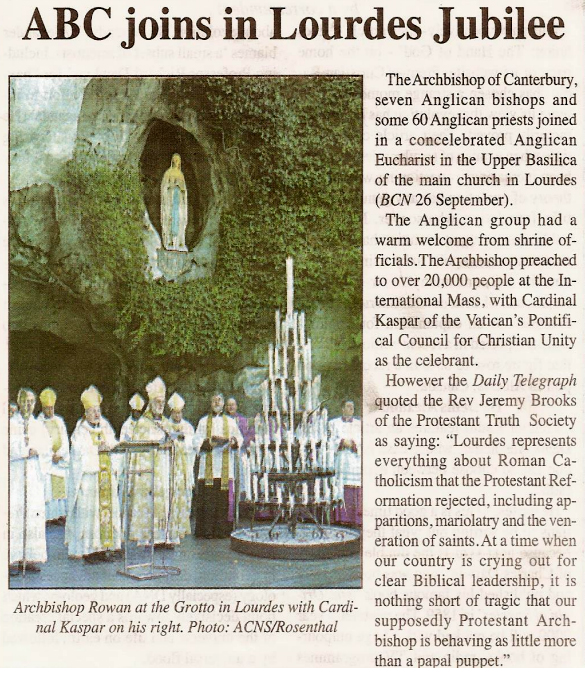 How apt, in this year which marks the 500th anniversary of The Reformation, are the comments by Rev Jeremy Brooks of the Protestant Truth Society.

And what about Rowan Williams’ successor, Justin Welby? How does he view The Reformation? Sadly, he seems destined, like his predecessor, to betray the work and sacrifice of many at the time of that gracious and wonderful move of God by His Spirit in liberating hearts, minds and souls from the damning superstitious grip of Roman Catholicism. I make this comment in the wake of a joint statement put out by him and his colleague, the Archbishop of York which can be read on this link –

‘We are told that the Archbishops of Canterbury and York are to express remorse for the Reformation. We understand that it is not just the cruelties of Rome but the reformation itself that is distasteful to this pair. All we ask is what are they doing in the Church of England, taking its pay and Protestant vows? It is clear that their loyalties are to the Pope and his religion. Look how they dress!’